Almost all I used to do for fun was work on my novel about a cast of characters that worked at Dayton’s department store in Minneapolis. But I haven’t written outside of my university job (current story: Prevent harmful algal bloom) for a year and a half now.

“When are you going to publish your Dayton’s novel?” friends ask.

I’ve finally started telling them the truth—that I’m not doing that anytime soon and it’s because I hit my head, coincidentally, at Dayton’s. Macy’s had occupied that building for years, but let’s just call it Dayton’s here. Why not? Macy’s is gone now, and the building’s redevelopment team calls their work “The Dayton’s Project.”

My Dayton’s novel (working title) is about the beginning of the end of Dayton’s, and it’s set mostly in the ‘90s. It’s been in my head for 25 years, since shortly after I quit selling women’s shoes there. I have a nurse character from the 1940s because Dayton’s used to have an infirmary up on the 10th floor for sick employees and customers. I’d discovered it one day when I’d gone looking for extra plastic shoe stands…or something like that…with a male colleague. I know that 1902-built building at 700 Nicollet Avenue pretty well.

I was photographing the fourth-floor women’s bathroom with my friend Allison during one of my nostalgia trips right before the redevelopment company came in to gut the building. The bathroom is art deco style with green tile work and red and black lacquer paint. It has its fans and followers. I’m just saying, it’s not that weird of me to photograph the bathroom. I’m not the only one. 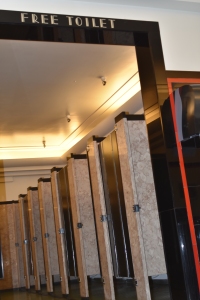 The fourth-floor women’s room is small. It’s a challenge to find a good angle if you want to capture the “Free Toilet” sign and tile work and, most importantly, the green porcelain sinks from 1937 or whenever, all in one picture. Allison was along this time to take an author portrait of me inside Dayton’s because certainly my book would be published soon, at least before the grand opening of the redevelopment.

The 12th floor had a well-known loo as well, with at least a dozen mirrors in the round vanity area. They reflected into each other forever, so you, your mother, and your grandma could powder your noses and see back to the beginning of time together, to your first female common ancestor.

The novel is done, really. A book club in Wayzata had even read the draft, and had me over for a feedback session. It was all going to happen quickly.

I aimed my camera in the fourth-floor bathroom, and to get in more of the floral tiles on the wall in front of me, I leaned against the wall behind me next to one of the hefty green sinks.

Then the wall moved.

I fell backward and hit my head on the sink. I lay on the floor in silent shock for a moment, until I finally answered Allison asking if she should call an ambulance. I told her no and explained why I fell.

“The wall moved?” Allison asked as I rolled to my hands and knees, the greens floor tiles separating into yellows and blues in front of my eyes.

Those block-hard green sinks survived the Macy’s occupation and they will probably survive as long as this city. But I fell out of love with them in that moment.

Going to the hospital was out of the question. Our Dayton’s nostalgia tour could not end until I’d eaten a popover at the Oak Grill Room. (“Popover” is a contender as the future title of my Dayton’s novel.)

Two of these faithful labs guarded the fire that always burned in the Oak Grill Room.

I ate wild rice soup and mandarin chicken salad to prove I was fine and then we each drove ourselves home.

I don’t remember if I even mentioned it to my husband. Lots of kids we know have suffered concussions playing soccer, so I knew I would feel normal again in a week or two. I knew to minimize screen time, so I didn’t go on my computer outside of work. I needed to work on those literary agent query letters, but I didn’t feel up to it.

I realized I didn’t feel up to doing anything with my novel. I forgot what the story was even about. Maybe the green sink had knocked it out of me.

Instead of getting better in a couple of weeks, I started feeling dizzy each morning. I thought it was low iron, so I took iron pills. My fingernails got nice and shiny, but my brain kept somersaulting in my skull for a few more months.

I wrote more than ever at my university job in agriculture and environment. I wrote about aquatic invasive species and soybean aphids and herbicide-resistant weeds. Those topics are as green as those art deco sinks, and I had no problems. I just couldn’t write about the intertwined lives of a women’s shoe department slut and other salespeople and the secrets of a dead department store nurse.

It seemed impossible that I’d lose interest. I’m a Dayton’s nerd. The Daytons are our Minnesota heroes, imperfect enough to be real, democratic enough to never want to be called our local “royalty.”

I’d toured the George Draper Dayton home in Worthington, read his autobiography and also his biography written by Bruce Dayton. I’d read Kristal Leebrick’s book about Dayton’s twice. I’d been to Governor Mark Dayton’s inauguration, eaten obsessively at the restaurant owned by his sons. I’d admired Governor Dayton’s passion for public service when he could have been an international playboy with all that family money.

Even my daughter loves Gov. Mark Dayton. She made this image the day he canceled schools due to extreme cold.

Now it was as if I’d held my head under the faucet of that sink and washed those Dayton men right out of my hair.

The writer Elizabeth Gilbert says in Big Magic: Creative Living Beyond Fear that if you neglect your book it will float into some astral plane where someone else could catch it. You can’t complain when they write it instead of you.

Is it a cop-out to blame a head injury that didn’t even send me to the doctor, when I still manage to write well about things like harmful algal bloom?

There was one other thing that happened right around the same time…that book club from Wayzata that had read my 2015 novel, Roseheart, and offered to read my Dayton’s novel draft. I had been given a lot of feedback already through friends and classes at Loft Literary Center. I had even hired a sensitivity reader to help me with some diverse characters and an adoption subplot because I didn’t want it to read like a script for All My Children, the show that had taught me almost everything I already knew about adopted people. Oh yes, I already understood the importance of feedback.

These Wayzata women would serve cheese and crackers, wine, and cookies. We’d have a ball, just like when I’d met with them in 2015 when they read and loved Roseheart.

I felt the different vibe right when I entered the community room in their condominium building. The host, I could see, seemed nervous.

They returned their manuscript copies I’d had printed and spiral bound for them. They had generously spent their time writing comments and corrections in the margins, had even flagged the pages with the bright miniature Post Its I’d sent them ahead of time for just that purpose.

Eighteen months have passed. The copies sit in a box in the office behind my bedroom at the back of the house where I dropped them when I got home that night.

Most people have stopped asking me when my Dayton’s novel will be published.

But what if someone else does catch it from the astral plane? I would be green with jealousy. As green as Mark Dayton’s eyes. As green as harmful algal bloom. As green as that sink that knocked it out of me.

Yes, it was the sink, I’m sure. Not the feedback.

Or maybe it doesn’t really matter why I stopped writing. I just can’t let that happen. I can’t let someone else catch my story from the astral plane.